While many Wizards are driven mad through study of the arcane, those who emerge stable under the weight of this power wield a force barely imaginable in awe and effect.

There are none that exist who have so obsessively studied the enigmatic and destructive nature of the arcane. While many Wizards are driven mad with this knowledge, often destroying themselves through lack of control, those who emerge stable under the weight of such power wield a force barely imaginable in awe and effect. 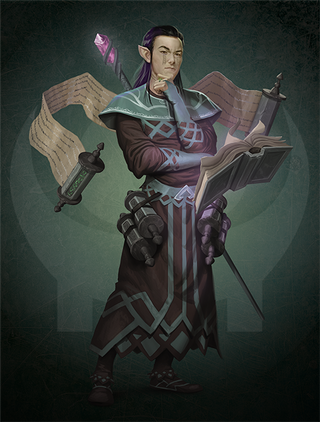 For in-depth guides to the Wizard and beyond, be sure to browse the class guides.

Wizards focus their studies on three schools of Magic: Fire, Cold and Arcane. In battle, the Wizard will gain a stacking Focus buff when an ability from one of these schools is first used. Each time a spell from the same school is used in succession, this buff will continue stacking until it reaches its stacking limit. The Wizard will retain the Focus buff until:

A spell of that school is not used for a period of time causing the buff to fade, or
The Wizard uses a spell from one of the other two schools resulting in a new buff being active.


There is rumored to be a fourth school of Magic discovered by certain recondite Wizards - devastating in effect and untethered to elemental constraints...

While adventuring, Wizards may discover scroll fragments connected to some of their core abilities. Once found, these fragments are scribed into the Wizard’s Living Codex and join with the core spell. Once joined, the markings become discernible and show the Wizard the secret of weaving these spells into successive, more powerful versions of themselves. In addition, Woven spells are instant cast and have no Mana cost.

Utility is a broad category. It can perhaps best be thought of as a sum of all abilities that do not fall under the other categories (Tanking, Healing, Damage Dealing, Crowd Controlling, Supporting)
While Wizards don't have the most broad range of utility, they provide a very valuable form of it thanks to their File:WIZ order of gatewalkers icon.png Order of the Gatewalkers passive ability, which enables the Wizard to learn teleportation spells.

In September, 2019's newsletter, Chris Perkins debuted a new segment where he answers commonly asked questions about the classes of Pantheon. Below are the questions and answers for the Cleric.