Warriors are a class available to players in Pantheon: Rise of the Fallen. They function primarily as a Tank, directing aggro and damage away from their allies, but their role does not end there: masterful strategists, Warriors possess numerous abilities capable of bolstering their allies and crippling their enemies in a variety of ways.

The warrior seemingly defies limits of physical strength, ability and resilience. However, not content with fortitude alone, he also refines his mind, becoming a master strategist in battle. 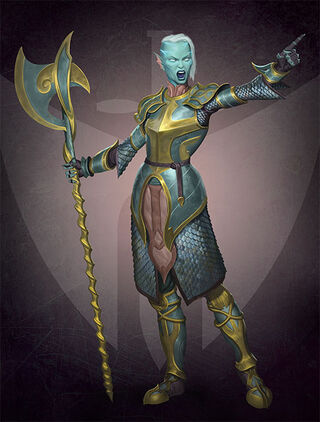 Much more than a soldier or mercenary, the Warrior seems to defy limits of physical strength, ability and resilience. However, she is not content with fortitude alone, but refines her mind as well, becoming a master strategist amidst the mayhem of battle.

For in-depth guides to the Warrior and beyond, be sure to browse the class guides.

Tank. The role of the tank is to grab and maintain the attention (aka aggro) of hostile creatures (aka mobs), directing damage away from their allies. To be able to properly tank, it is important to understand the Hate game mechanic. Mobs have a hidden "Hate list" which contains every PC and pet that is in active combat with it ("on aggro"). Whoever is at the top of the list is the target that the Mob will attack. Nearly every action a PC takes while on aggro with a Mob generates hate, though the primary sources of hate are: Dealing Damage, Healing and using specific abilities designed to generate Hate (referred to as Taunts)

The tanks job is to use their Taunt abilities to top the Hate List, keeping damage focused on themselves so that healers have as few targets to heal as possible.

If a party has more than one tank, it is useful to designate a Main Tank (MT) and an Off Tank (OT).

Utility. Utility is a broad category. Typically, it means that a class is capable of providing a variety of different benefits to their party or a variety of penalties (debuffs) to their enemies, or a mix of both. The warrior's most notable form of utility are their War Banners: wide, placed AoE effects that help the warrior and their group adapt to a wide variety of situations

A Warrior's nameplate. The row beneath the endurance bar represents current Battle Points, while the bar along the side represents Resilience

"When all of the Warrior’s armor, natural toughness and magical enhancements have been applied, Resilience is the final layer that sits on top and represents the Warriors skill in leveraging all of these elements in defending themselves. A Warrior with high Resilience who knows how to maintain it in the heat of battle is unrivaled in raw, physical durability. Therefore Resilience is not a resource that Warriors spend; rather, they work to keep it as high as possible during combat, or to build it up again if it breaks down."

When a Warrior takes physical damage, their Resilience negates some of the damage dealt before the Warrior's other forms of mitigation are applied. The exact percentage that is negated depends on how full the Warrior's Resilience pool was when they were hit, but the total mitigation caps at 20%.

Healing. If you are under 50% Resilience in combat, 20% of the effective healing you receive through any source is converted into a 1-to-1 replenishment of Resilience.
Shield Block is one of the Warrior's activated abilities. By using your Shield Block ability, you reduce how much Phyiscal damage you take and convert it into Resilience. Proper timing when using Shield Block rewards the Warrior with larger bursts of Resilience.

Resilience is calculated based on 20% of the Warrior's maximum Armor Class, including buffs. When outside of combat, a Warrior's resilience always levels itself out to 50%, draining or filling by roughly 1% per second.