Summoners are a class available to players in Pantheon: Rise of the Fallen. Their primary function is Damage, making their focus to bring down each foe as swiftly and efficiently as possible. The Summoner's foremost means of defeating their foes are their Arcamental--ethereal beings conjured from another world by the Summoner. The Summoner can choose between one of four elements, all with different functions, enabling them to help fill any gaps their team might have. The Summoner themselves aren't unfamiliar with combat magics, either, and their foes will find blades of mana--and even objects from their environment--brought to bear against them.

The Summoner has developed a powerful arcane command to conjure sustenance, tools, barricades, weaponry, even fantastic creatures of incredible sgrength - all of this at her whim. 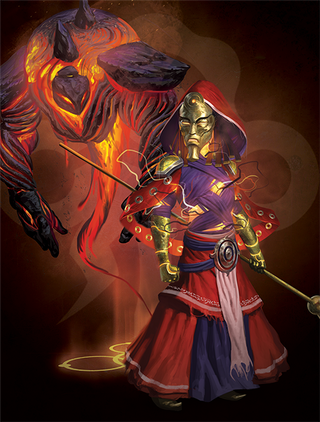 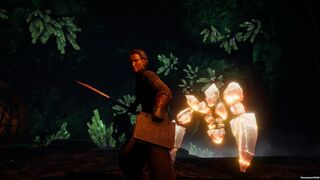 A male Human Summoner with their Arcamental. [Pre-alpha, 2018].

It is a curious thing, to reach a hand into realities other than your own. This is the art of the Summoner, whose hand then bring forth all manner of things that did not exist only moments before. The Summoners command of arcane conjuration is unrivaled, able to bring forth sustenance, tools, barricades, weaponry, even fantastic creatures of incredible strength and ability – all of this at their whim.

The Mana Plane is home to near-sentient entities of pure arcane energy known as Mana Ghosts. Without purpose or form, it is the Summoner who has fashioned a use for them. Through their mastery of arcane summoning and the use of alchemical magic, the Summoner is able to pull a Mana Ghost through time and space while binding it to an elemental property. Historically the most stable and effective bindings have been to the elements of Earth, Water, Fire and Wind, though experimentation is ongoing. These creations are known as Arcamentals and are the primary way Summoners engage in combat.

For in-depth guides to the Summoner and beyond, be sure to browse the class guides.

Arcamentals are categorized into 4 classes based on the elemental they are bound to. As you grow in power, your Arcamental will grow as well, becoming stronger and gaining access to more abilities. The Summoner will be able to choose which abilities their Arcamental has active.

Arcamentals are capable of using special armor and weapons that the summoner creates. These weapons improve the Arcamental’s effectiveness in various ways by improving its unique attributes: Power, Energy, Solidity, or Quickness. The different Arcamental types will have a unique primary and secondary attribute that the Summoner will want to increase as much as possible.

The fire-based Fury specializes in dealing powerful Fire, Nature and Magic damage to the Summoner’s enemies. Capable of putting enemies into a burning state.

The earth-based Titan specializes in detaining the Summoner’s enemies and protecting the Summoner from harm. Capable of putting enemies into a fatigued state.

The wind-based Zephyr specializes in dealing rapid, close-range Physical and Nature damage to the Summoner’s enemies. Capable of putting enemies into a disoriented state.