Shamans are a class available to players in Pantheon: Rise of the Fallen. They are one of the three primary Healers (the other two being Clerics and Druids). A Shaman's foremost healing spells are their healing-over-time abilities, which they can synergize with other spells to create bursts of healing. Not content with merely healing their allies, Shaman are also capable of casting a number of buffs, bolstering attributes, amplifying attack speed and reinforcing resistances. Foes can suffer the inverse and find themselves wracked with debuffs and DoTs. 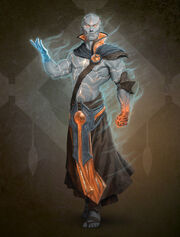 The Shaman is a disciple of ancient mysticism that uses his powers to call upon spiritual forces. Residing within a planar realm called the Spiritual Arcana are the spirits of the dead and the energy they emanate. By following the techniques of Ethosian priests, Shamans can interact with spirits and siphon their energies to bolster their own powers. To the Shaman, death is not feared. It is a natural course all must take. Immortality is what they fear.

It is rumored that Shaman live in every age at once. Thus, Shamans know the ancestry of any friend or foe, wielding this knowledge to great benefit, or baneful cost. It is a second sight, allowing them to sense the threads of energy woven through Terminus’ past. It is this unique gift that allow Shamans to discern the ancestry of friend or foe, wielding this knowledge in the form of powerful Boons – or frightful Banes.

For in-depth guides to the Shaman and beyond, be sure to browse the class guides.

Healer. The role of the healer is a critical one. The healer's job, first and foremost, is to ensure that none of their teammates die. Within an ideal group set-up, the Healer can focus the majority of their healing on a single teammate: the party's Tank.

Support. A class in the support role has access to many beneficial abilities designed to help their teammates survive and fight beyond their normal means.

Utility. Utility is a broad category. It can perhaps best be thought of as a sum of all abilities that do not fall under the other categories (Tanking, Healing, Damage Dealing, Crowd Controlling, Supporting)

A Shaman's nameplate. The stone along the side shows a closed eye, which will gradually open as the Shaman gains Vision

Mana
Vision. Shamans gain Vision as a percentage of the effective healing they perform on themselves and their allies. The more Vision a Shaman accumulates, the faster their spell-casting speed becomes, up to a total of 20%. This is represented in the UI by a closed eye in the character portrait. As a Shaman’s Vision increases, the eye will progressively open until full.