Rogues are a class available to players in Pantheon: Rise of the Fallen. Their primary function is Damage, making their focus to bring down each foe as swiftly and efficiently as possible. Rogues achieve this end by stalking through the shadows, poisoning their blades and seeking opportunities to descend on their unwary foes with precise attacks and improvised alchemical concoctions that wound and disable. But the Rogue is far more than a killer wrapped in shadow, they are capable of offering an array of utility to those they call allies. Scouting through the cover of shadow, laying traps or disarming them, picking locks and even CC.

The treacherous Rogue is far more than a trickster. With her daggers, she is a ruinous force that smiles at the dark places and unravels her enemies with terrifying efficiency. 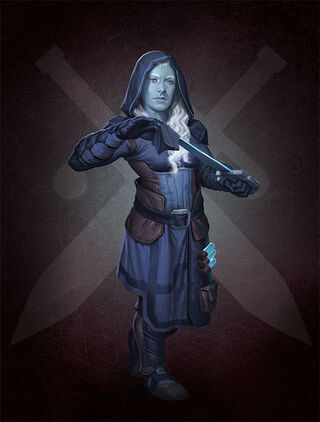 In the shifting sands of this fragile era, Rogues are sought out for the faceless affairs of nations. Yet their allegiance is rarely to a banner or creed, but to themselves. With daggers drawn, the treacherous Rogue is a ruinous force, unraveling their enemies with terrifying speed and efficiency. As melee specialists, Rogues have trained extensively with one-handed weapons, but are most deadly with a dagger in their main hand, plunged deep into the back of their enemy.

Rogues are proficient in most melee weapons, experts with daggers and poisons. They are masters of planar edged weaponry, able to detect and sever planar connections of power.

While exceptionally skilled with dagger and blade, Rogues avoid combat unless it is on their terms. Masters of subterfuge, they plot their move from the shadows to avoid detection. They will find an opening of opportunity, or rely on their alchemical talents to create one themselves. When the moment arrives, there are few on Terminus who can match the deadly precision of a Rogue's onslaught. And fewer still who can disappear in the wake of such carnage as if they were never there.

For in-depth guides to the Rogue and beyond, be sure to browse the class guides.

Utility is a broad category. It can perhaps best be thought of as a sum of all abilities that do not fall under the other categories (Tanking, Healing, Damage Dealing, Crowd Controlling, Supporting)

Endurance
Opportunity - Rogues generate Opportunity while under the effects of

Shadow Walk, up to a maximum of 4 stored Opportunity, and they last until spent.