Rangers are a class available to players in Pantheon: Rise of the Fallen. Their primary function is Damage, making their focus to bring down each foe as swiftly and efficiently as possible. Rangers are unique in that they blend melee, ranged and spells together to reach their full potential.

In untamed regions, the Ranger is a versatile and ferocious warrior, united with the land and animals he communes with. 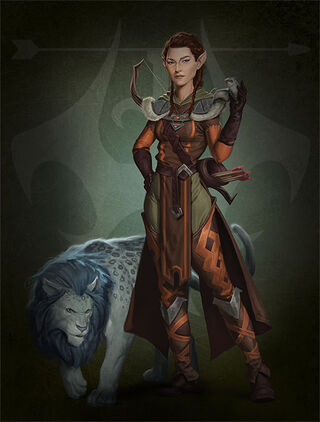 The wilds of Terminus call to Rangers, drawing them deeper into its mysteries. It is in these untamed regions of the world that Rangers are forged into versatile and ferocious warriors, united with the land and animals they commune with.

The Ranger excels at both melee and ranged combat, able to weave between the two with elegant ease. In close combat, Rangers prefer the use of one-hand weapons over two-handed, able to deliver devastating damage with swift precision. When the Ranger chooses to withdraw from close quarters combat, they can masterfully employ bows and crossbows to inflict lethal ranged damage, restrain enemies, illuminate their environment, set traps or flee from danger.

For in-depth guides to the Ranger and beyond, be sure to browse the class guides.

Utility is a broad category. It can perhaps best be thought of as a sum of all abilities that do not fall under the other categories (Tanking, Healing, Damage Dealing, Crowd Controlling, Supporting)

Endurance
Momentum - In combat, Rangers will constantly generate Momentum as a percentage of the damage they deal. In addition, certain melee and range abilities will increase a Ranger's Momentum by a certain amount when used. Other abilities will have a Momentum cost in order to be performed. The more Momentum a Ranger has, the faster their melee and ranged attack speed becomes, up to a 20% increase when Momentum is full. When a Ranger chooses to spend Momentum, their melee and ranged attack speed will slow in proportion until the Ranger builds their momentum up again.

Below are questions and answers for the Ranger, both from the Burning Questions segments (debuted in 2019) and other official sources.