Paladins are a class available to players in Pantheon: Rise of the Fallen. They are one of the three primary Tanks (the other two being Dire Lords and Warriors). Out of all of the tanks, Paladins are the most support oriented, capable of healing their allies and boosting their armor class. Offensively, Paladins focus on stunning their enemies, canceling spells and preventing melee attacks. Like the Clerics they used to be, Paladins are ardent opponents of Undead, possessing an array of spells designed to subdue and slay any undead that cross their path.

Once a Cleric, the Paladin has a call transcending the customs of the cleric order. Led by her convictions, she sets off to carry out her own righteous judgment. 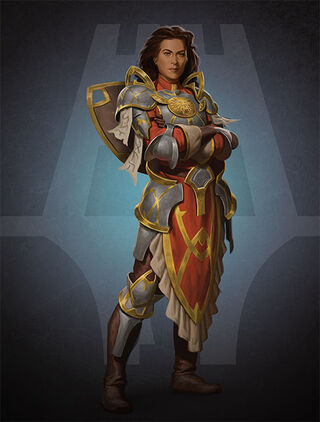 At its core, the Paladin is a plate-armored, melee specialist imbued with celestial power. This enables them to wield spoken rebukes with awesome effect. In addition, by shedding the dogma of the Cleric Order, they have devoted themselves to the study of arms and armor, giving Paladins renowned ability in defensive combat. Perhaps most iconically, the Paladin is driven by an unquenchable hatred of Undeath, a flame they have stoked into a ceaseless pursuit. Thus, a Paladin is never more fierce than when they stand face to face with Undeath.

For in-depth guides to the Paladin and beyond, be sure to browse the class guides.

Tank. The role of the tank is to grab and maintain the attention (aggro) of hostile creatures (mobs), directing damage away from their allies. To be able to properly tank, it is important to understand the Hate mechanic. Mobs have a hidden "Hate list" which contains every PC and pet that is in active combat with it ("on aggro"). Whoever is at the top of the list is the target the Mob will attack. Nearly every action a PC takes while on aggro generates hate, though the primary sources are: Dealing Damage, Healing and using specific abilities designed to generate Hate (referred to as Taunts). The tank's job is to use their Taunt abilities to top the Hate List, keeping damage focused on themselves so that healers have as few targets to heal as possible.
If a party has more than one tank, it is useful to designate a Main Tank (MT) and an Off Tank (OT).

In combat, Paladins will gain Wrath as they take damage from enemies. Paladins will also gain an amount of Wrath based on their Constitution every time their group slays an enemy. Also, certain abilities will increase a Paladin’s Wrath by a certain amount when used. Other abilities will have a Wrath cost in order to be performed.