Humans are a Race available to player characters in Pantheon: Rise of the Fallen.

Since the dawn of Thronefast five centuries ago, Humans have stood at the pinnacle of influence, surviving threats against their walls - and those from within.

True power speaks not a word, yet its presence is deafening. The city of Thronefast has been that presence for the Humans for nearly 500 years, and to know their heights of power is to behold the capital, a breathtaking jewel in the light of dawn. The breadth of their influence is glimpsed in the majestic navy, unrivaled on the open waters. Students and masters of nearly every art and discipline, Humans' middle-rung size and strength is perhaps a lone mediocrity, their oft flamboyant pride not withering before kings, ghouls or dragons. 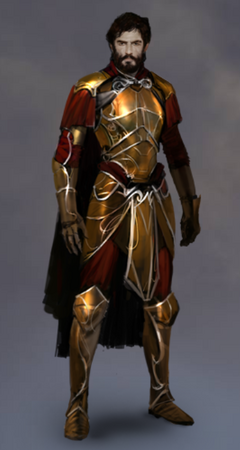 Of all the multitudes scattered across Terminus, no other group has been so defined, aided and threatened by their leaders as the Humans. When first arriving on the continent that became Kingsreach, the frail colony was helpless under a winter so stark it was called "cursed". Only by heavy reliance upon the nearby Elves of Faerthale did they outlast the tempest. Yet in the thaws of Spring, the Human King Amensol rallied his people to found a city all their own: Havensong. Settled in a forest at the base of the Roan Mountains, the town was a jewel of dedicated effort, born from a people unified by their harrows and trials. That very year, Amensol and his Queen welcomed their firstborn son, Avendyr, as heir, and the fate of the race was aimed to soar.

Yet less than twenty five years later the Humans were facing extinction. Seven years into the Deicide War, the Ravaging Lord of the Revenant permitted one of the Human's former gods, Ossari, rain down upon Havensong every nightmare of war his armies possessed. The undermanned city endured a three week siege, and King Amensol was cast among the corpses of his soldiers, slain by Ossari the Betrayer himself. The High Mortal's fury culminated in having every sundered shred of the ruined city carried to the cliffs of Ru'lun and thrown into the churning seas below. The young heir Avendyr spent his first night as king shepherding survivors back to the Silent Sanctum in the belly of the Roans, not stopping for the dawn or to grieve.

When the Deicide War turned in favor of the Sacred Six races, Avendyr gained a broad reputation for battlefront leadership and also for his gift of stirring oration. His famed 'Speech of Souls' is still repeated amongst Humans and Elves, credited with reviving the hearts of the "surviving dead", a reference to the broken hearted victors of the war. With the bold vision of his father, The First King Out of the Sanctum inspired his people with the founding of Thronefast, a coastal seat of power that flourished into the preeminent trade and commerce hub on Terminus. At the time of Avendyr's death in 525 IH, the capital city had no equal in wealth or influence, no peer in beauty or acclaim, and his passing was honored across four continents.

Over 450 years later the Humans are still prospering, though the heritage of sacrifice and service has been exchanged for vice amongst much of the aristocracy. Nevertheless, Amenthiel 'The Lady King', a true blood heir of Avendyr, has shown traits of her ancestor's character and composure. Since the horrifying Catastrophe at Azeris took the life of her husband as well as her predecessor to the throne, Amenthiel's nerve and shrewdness thwarted enemies of a suddenly weakened Thronefast. In a speech shouted to peasant and wellborn alike, Amenthiel set the course of the nation like a steady captain emerging from the clutches of a maelstrom. While the Humans have endured yet another peril, their city glimmers like the ancient crown set upon their fair regent's dauntless brow, for now.

For an in-depth look at Humans and the other races, please see the Race Guide.

Humans have an innate advantage against creatures with the Alarmist Disposition.