Gnomes are a Race available to player characters in Pantheon: Rise of the Fallen.

Enigmatic and isolated within the floating keep of the Skyhold, the Gnomes are masters of the arcane, and the peculiar.

It is a splendid irony that the smallest of the foreign races contains the most mystery. Peerless in understanding and wielding of the arcane, the Gnomes are beings without true physical form due to events on their home world. Meticulous and easily absorbed in the many tasks aboard their floating city ship Skyhold, diligence and service tend to be the highest Gnome virtues, along with sound innovation. Expansion is not a cultural aim, and the Gnomes have no real enemies, but some do long to face the perils and prizes of Terminus at large. 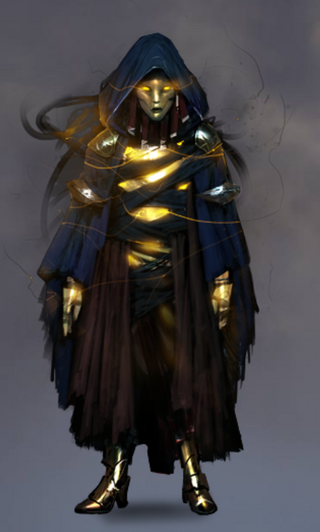 Alas, Stormona. This rare planet, known as a "sunworld", formed from the inside out. Her very mass was grafted together in a sphere around a thimble of a star named Elos, like a pearl gathering an oyster over itself. Through a handful of colder, distant stars shined upon Stormona, its outer crust endured under a shadowy veil of dimness, like a forgotten bride. For centuries the Gnomes toiled under the constant dusk of the Far Stars, surviving not by individual might, but a collective inertia that conquered challenges of every scale. Yet an ancient myth persisted amongst the race. It spoke of a moment occurring but once a generation, when the Far Stars would abandon Stormona briefly and true night would fall upon their lands. In that sudden darkness, up through the very ground would whisper faint hues of light: the call of Elos, the one Nearstar. A splinter of the native Gnomes held onto the myth as truth, and on the long-awaited twilight they entered fissures in the metallic soil of the crust. Here they beheld refracted flickers of radiant light, coming from deep beneath the surface of their dim planet.

"Our course was set when the first ray warmed the eyes of the first Gnome. From that moment, it was only a question of finding the fire." 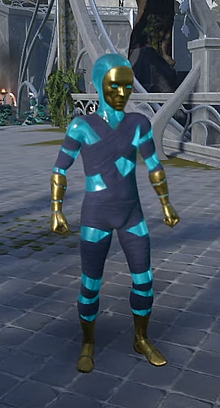 This discovery touched off the first rift in Gnomen history, of which there are two. For by the time the travelers returned, the dusklight of the Far Stars had as well. The Eldership of the Gnomes was sundered over their account of Elos' existence. This discord was evidenced by a single "Brightstone" brought from the depths and presented to the council. For half of their number, the stone was rebuked as ordinary and dead. For the remainder however, it was hailed as glowing and alive, albeit faint. Thus, when for the first time in its history the Eldership could reach no accord, it was disbanded, permitting the growing number of Gnomes to return to the search for Elos.

Shortly after launch, the hopeful exploration was mired in tragedy as the Gnomes learned they could venture but only so far toward Elos at a time. Their eyes were untrained for such light, which grew stronger as they neared and burned many blind at first. Their skin, too dense from the cold of the outer surface, left their bodies faint from the heat of Elos' rays. Thus it was a patient descent -- stretched over many generations -- that brought the Gnomes to the door of the Nearstar at last. When their Elderhood finally permitted breaking through the inner crust, there drew a sight beyond imagination: settled in an open expanse was the majestic Elos, with small "planets" orbiting about in undisturbed choreography. The walls of this cavernous sphere were lined with a glowing mineral new to the Gnomes, which they learned held the power of Elos Fire. This mineral they named Resivore, for it held deposits of arcane energy, which could be drawn back out and into the very body of a Gnome. The powers and abilities it granted were far beyond any warrior or mage. These wielders of Elos Fire became known as the Archanos.

Yet this otherworldly paradise, which ought have been beyond blemish, ushered in the second rift amongst the Gnomes. All too quickly the powers of Elos Fire were sought in gluttonous measure by the Archanos, their personal cravings overtaking a discernment for all Gnomes. Foreseeing disaster, a splinter of the Gnomes petitioned the Elderhood to restrict the use of Elos Fire, pleading that the Gnomes retreat for a brief time outside the inner crust. These were called "Prophain" by the Archanos hierarchy, a name concocted from accusation and mockery. Though the Prophain spoke with earnest fear for their brother and sisters, the allure of the Archanos crushed their justified concerns.

The Prophain were exiled into a floating prison known as the Skyhold, fated to circle Elos til she consumed them. This airborne expanse was built of spent Resivore, though the Archanos critically misunderstood that Resivore could be infused anew. For years the Prophain painstakingly extracted the resource, constructing a pillar within the heart of the Skyhold of pure Resivore. Therein they stored a measure of Elos Fire. Yet as they labored in secret, the Archanos worked ever more madly to draw ethereal power from the star. To this end they constructed spires of pure Resivore, aiming the immense towers directly at Elos, sapping power beyond the natural limits the star freely gave.

"For gazing too long, we lost the ability to see. For taking too much, we lost the ability to feel. These grave indiscretions transfigured us into gossamer, wisp things. Many did not even comprehend the peril until after the door of their escape had sealed. I saw their faces as they perished, which were gleeful and serene. And were it not my lot to be woken, I too would've faded in a furious bliss and vanished."

The gorge of her energy began to weaken Elos, loosing the bonds of her power in devastating surges. As her unbridled rays struck the inner crust, many of the Gnomes were consumed. Yet the Skyhold, built to lock the Prophain away until death, bore well against the lashes of Elos for a time. When a giant hole was struck straight through the crusts of Stormona, the exiled Gnomes piloted the structure through it, escaping to the quiet atmosphere of their ancestors. Yet survival had not been perfect. As the bristling energy in the Resivore continued to sift through the Skyhold, a dire conclusion was reached by the Gnomes: they must abandon their mortal flesh or perish.

"With the very power that was afflicting our bodies, we were able to repossess our souls into the Resivore cloth called Maq'esh. This garment, woven from the hallowed mineral, was meant to further our survival as we drew nearer to Elos, though we knew it could not preserve us against her final embrace."

When deposited on Terminus, the Skyhold floated undisturbed above Whitethaw for nearly 50 years. A deep, resonant hum slowly bore an inverted cone in the snow directly underneath the hulk, otherwise the ship roosted in the skies with silent unconcern. Now with modest access for wayfarers, it stands as the capital city of the Gnomes, striking in its inorganic majesty, begging more questions than the race cares to answer. Terminus has brought a return to the unified, workman traits of their ancient brothers and sisters, and the Gnomes may not have been so at peace in all their existence.

Gnomes have an innate advantage against creatures with the Mastermind disposition.

The following is summarized from the Race Guide. For more details, be please that article.