Elves are a Race available to player characters in Pantheon: Rise of the Fallen. Elves are sub-divided into two types, by their outlook: Ashen Elves and Ember Elves. Players are able to choose which faction of elf they want to play during Character Creation.

Long afflicted, the Elves now mourn and flourish under the council rule of Faerthale and the brilliance of the Lucent Tree.

On the Elves[edit | edit source]

With loyalty that is not easily won or lost, Elves carry an immortal sense of how fleeting life is, born of their own brushes with total extinction. But far more than frail survivors, they are unrivaled artists from architecture to agriculture, with arcane and physical prowesses as natural as the wind, rain and storm. Sibling hearts divide the race into two distinct groups: Ashen Elves steward Faerthale from within, eternally vigilant in watch and guard, while their Ember brethren cast an aggressive eye toward the surrounding lands, rooting out evil where it resides. 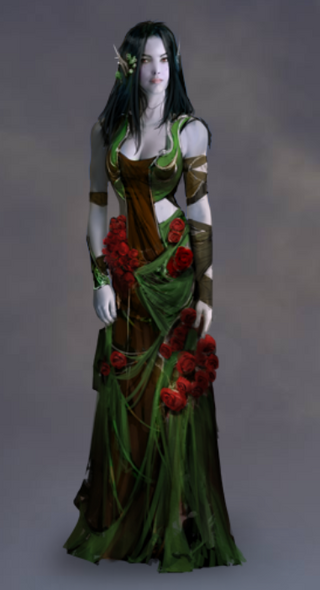 Of Their Tale[edit | edit source]

To understand the Elves of Faerthale rightly, one must walk among the pages of their ancestors. It is a thick opus, full with triumphs and tragedies, begun long before their kind set upon Terminus. On the planet S'iolaen, the Elves lived as one great host for a thousand years, mastering battle, trade and the arcane. Power was concentrated into the Three Realms: Guardian North, Fertile West and Archestral South. Yet an age of unmitigated pestilence fractured their unity, and in a climax of unrest the militant cities of the North laid waste to the richer lands in the West.

"For the north deemed themselves suffering unequally. Any disparity was owed to their own mishandlings and greedy authorities, yet they prodded themselves with false rumors of the West's secret provisions. Unifying with the demonic Beasts of Tohr they had so long protected our Three Realms against, the Northern Elves marched upon their brothers without mercy. Thus they are now the Tohr'mentirii, a Severed Host, cut off from Elvenhood for all of time."

- Taken from the Sepher S'iolaen .

Under this calamity, the Elven gods Aellos and Dythiir led survivors to a lush valley far in the East, the forgotten hallow of race's birth. The sight which greeted the refugees melted their sorrow like a radiant dawn: a tree of such enormous size it was at first mistaken for a mountain, laden with clouds. Up from the heart of the teeming valley the regal tree soared, arrayed in animal and vegetative life, prismatic rainbows and falling streams. The base was half a day's journey around, even upon the swiftest horse. So powerful was the trunk in its ascent, that slabs of great rocks from far below the valley soil had been pulled up into sired ridges. The four highest branches stretched out like bridges in the sky, though they did not altogether span the chasm of the valley.

"From each of the four chief limbs fell the fruit of a season: leaves made of snow; blossoms of drifting rain; blooms of tangible heat; drifts of reds and golds that swirled like sands on the valley floor. There was a storm cloud caught between two branches, flashing glints within its folds. Through the knuckles of the cavernous roots below flowed the emerald river N'yleen, anchoring the four resplendent regions in fertility. This was Lumos, the Second Dawn."

Yet in short decades the ravenous Tohr'mentirii tracked their divorced brothers to this bountiful new home. Hollowed by hatred and joining indistinguishable ranks with the Beasts of Tohr, they razed the valley with infernal flame. By the end of their siege even Lumos was scorched and dying. The Elves took flight into the lands of pestilence as desperate nomads. In this mourning hour they took as their namesake "The Ashen", painting their faces from elder to infant with cinders of Lumos itself. Yet Dythiir pulled the Heartseed of Lumos from the desecrated tree and gave it to the Ashen Elves, while Aellos bestowed a two-fold prophecy, declaring that the seed would be planted anew in foreign lands. Thus, the Elven era of Terminus began with promise. Once a home was secured in the clefts of the Roan mountains, the Heartseed was planted with solemn ceremony. This tree they named Lucent, the Third Light. "In these first months upon the land, a new government was formed. There would now be a Council of Nine Branches, each with equal authority, with one from the Nine to oversee impartially. Thus there could be no reprise of the solitary Guardian North, nor a West unaccounted for. Yet so winnowed were our ranks in the first years that some barely older than children served on Council for their trade."

Over the hundreds of interweaving years, the Ashen Elves grew alongside the mountain and the Lucent. Yet fate did not abide this sanctuary, and with the Deicide War the Revenant ravaged Kingsreach much like the Tohr'mentirii of old did the Eastern Valley. Once more the Elves were forced to flee, once more their holy tree was burned alive. When the battle turned in their favor, the whole of the nation ran from the Silent Sanctum to their tortured giant, placing innumerable hands upon the trunk. There they felt a soft warmth, not from smoldering husk, but the deepest part within --

"From the posture of lament we erupted, snatched from grief over to joy. It was felt the glow of the Heartseed, drawing up through the fissures of ax heads, below the skin curled by the departed Revenant flames. The Tree was wounded but alive, and thus was Faerthale herself. This day became the chief holiday on our calendar, with feasts running a week prior and after the date."

In that hour a new branch of Elf sprung from the Ashen. These are the Ember, a vibrant class who seek to return their people to the ancient days of promise on S'iolaem, before the age of pestilence. These contrast with the Ashen, who seek only to prosper within the Five Forests around Faerthale, ambitions counterweighted by memories of the many Elven sorrows. The two veins of Elvenhood coexist even now, though days may be drawing near that will bond them further or tear them apart. For there is the second half to Aellos' prophecy, which warned of a Third Inferno for the Elven race. The Ashen believe the Revenant fulfilled that requirement, in blood and flame. Ember disciples aggressively protest that interpretation, claiming the third crucible is yet to come...

The Elves of Faerthale are in conflict with themselves. They are unsure of how best to understand the horrors of their past and divided over how to step into their future. Punctuating this divide are two significant branches of the race: Ashen and Ember. These two are not subraces, they are not openly hostile toward each other. No, Ashen and Ember are more like siblings born of the same mother, but only two children among a total of five or six.

Yet the tension carried between these two siblings twists and turns throughout the entire family. The Ashen/Ember fracture originates in an old but common cultural conundrum: how do we survive in this hostile world? For Ashen that answer can only be found in an earnestly devout and studiously insulated culture. A culture that carries the sorrow of their past on their very face, cradles it in their heart and meditates on it in their mind.

For Ember, that approach sounds like a well bodied creature stepping into a coffin and calling it a suit of armor. This is not because Ember are careless or flighty. In fact they draw on an even more ancient heritage of Elfdom, an era when the race stood alone as masters of an entire hemisphere.

So the conflict of the Elves is not one of Past vs Future, but rather of Hope vs Hope. Nevertheless the consequences of this divide are very real, and fate will not let this peaceful discord abide forever.

Ashen Elves are intelligent, wise and measured. They give themselves to study, memorization and recitation, and become fierce wielders of the insights they gain. They are generally cold and dispassionate toward outsiders. This isn't because they think everyone beyond Faerthale is the Revenant or Tohr'mentirii, though there is a distrust toward non-Elves that can lead to suspicion. Instead the Ashen have cultivated an intense preoccupation with their own world. They have no great trouble acknowledging the good of others, but they are reluctant to see the merit in embracing them. If the Elven way is the best way then any way that's not Elven is, by default, not as good.

Ember Elves are emblazoned fighters with impassioned hearts. They believe evil should be met where it sleeps and dealt with swiftly with weapon in hand. They cut a path far beyond their siblings due to a zeal that lives just below the skin. It isn't a passion of affection, but a fervent desire to visit death upon would be harmers of their people while they are still far away from Faerthale. I think this is where a misconception can occur in who the Ember are, because they are not simply the more relaxed and fiery cousin in the family. They don't necessarily trust outsiders any more than Ashen, but they do see the merit of exploring and engaging the vastness of the outside world. The Ember have an aggressive concern for their people that manifests in a hunter's heart, rather than a priest's piety.

The Elves are not two branches, but three. The third and most numerous is the Lucent Elf, and they run a pretty wide range in the space between the Ashen and Ember.
For Lucent Elves, the Ashen heritage of suspicion toward outsiders is distilled down into something more like reservation and caution. They don't all have the same thoughts toward outsiders, but generally speaking they have no abiding fear of other races or overwhelming concern about their presence within Elven territory. But they still prefer the woods of their home to the wilds of elsewhere, and if they travel beyond Faerthale it is most often out of need instead of adventure.

The elves of Faerthale share two characteristics: placing high value on the traditions of their people, and keeping a steady guard over the Lucent Tree. But beyond these shared characteristics, there is meaningful diversity among their people. This is especially true for the two main factions of elves: the ashen elves, and the ember elves.

All elves gain an innate advantage against the Truesight disposition.

Elves have two dominant and opposed schools of thought: Ashen believe in seclusion and study, while Ember believe in swift and decisive action. The careful study of the Ashen assures they make for great spell casters, while the adventurousness of the Ember guarantees a surefooted and unwavering foe. But regardless of an Ashen or Ember outlook, elves are an agile people with an innate bond with nature.

The following is summarized from the Race Guide. For more details, be please that article.