Druids are a class available to players in Pantheon: Rise of the Fallen. They are one of the three primary Healers (the other two being Clerics and Shamans). Druids are the masters of in-direct healing. This can be seen in three forms: Druids can boost a player's natural health regeneration, they can boost the effectiveness of healing received by a target, and they are capable of casting area of effect (AoE) heals.

With their mystical companion Hirode by their side, Druids can adapt to a variety of situations: from baring nature's fury on their foes through lightning and stinging swarms, cloaking their allies in camouflage or wrapping them in thorns that damage any enemy foolish enough to strike, and teleporting themselves and allies to the Wandering Stones scattered across Terminus.

The wild-eyed Druid has answered a dangerous call: to embrace the natural world of Terminus and peer into its mysteries. With the manifold fragments of other worlds and realms now on Terminus, the landscape is highly diverse and treacherous. For this reason, Druids are often revered as visionaries who can see beyond the fragmented terrain and into the heart of Terminus itself. 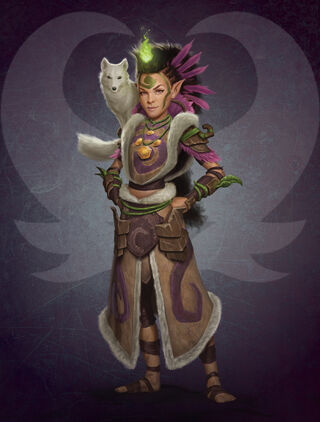 A Halfling Druid. Hirode can be seen, perched on the druid's shoulder.

At its core, the Druid is a light-armored mystic who is able to draw out aspects of the natural world and imbue them into other living things or project them into their surroundings. But there is a fine line they must walk as they gaze ever-deeper into the secrets of Terminus. The Druids who learn to master these revelations are rumored to have incredible restorative abilities, while wielding the power to command the weather itself. Surely, there is rarely a display as awe-filled as this kind of fury when kindled.

For in-depth guides to the Druid and beyond, be sure to browse the class guides.

Healer. The role of the healer is a critical one. The healer's job, first and foremost, is to ensure that none of their teammates die. Within an ideal group set-up, the Healer can focus the majority of their healing on a single teammate: the party's Tank.
Among the Healers, Druids are the masters of in-direct healing. This can be seen in three primary forms: Druids can boost a player's natural health regeneration (25px Imbue Trait: Ashen Regeneration), they can boost the effectiveness of healing received by a target (25px Hirode's Shelter), and they are capable of casting area of effect (AoE) heals (25px Verdanfire Tree). Druids also have a unique passive ability called (25px Reverberation), which causes healing effects cast by any other member of the group to jump to another group member, so long as the druid themselves had a healing effect active on the initial target.

Support. A class in the support role has access to many beneficial abilities designed to help their teammates survive and fight beyond their normal means.
Druids have access to a line of spells called "Imbue Trait", which provide a variety of beneficial effects such as: boosting movement speed (25px Speed of the White Wolf), or boosting the armor class, stamina statistic and stun resistance of their ally (25px Imbue Trait: Grizzly's Resilience).

Utility. Utility is a broad category. It can perhaps best be thought of as a sum of all abilities that do not fall under the other categories (Tanking, Healing, Damage Dealing, Crowd Controlling, Supporting)
Druids have access to a variety of utility spells, such as invisibility (25px Nature Shroud), damage shields (25px Verdanfire Briars), and creating bridges of vines to help cross gaps in the environment (25px Vinewoven Bridge)