Dire Lord is a class available to players in Pantheon: Rise of the Fallen. They function primarily as a Tank, directing aggro and damage away from their allies. Dire Lords specialize in dealing with magic-wielding foes, and are capable of making many AoE attacks.

The Dire Lord is considered a myth by most. In the oral tradition of Terminus’ history, there are legends that speak of Dire Lords capable of mastering the crippling power of fear, with some able to manipulate the very essence of their enemies. 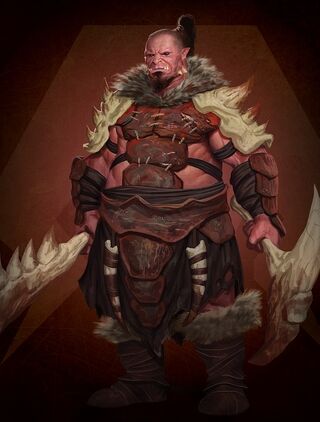 The Dire Lord is a proficient combatant that is known for their swift and brutal melee attacks and their relentless self-healing. But while battling their enemy in a corporeal sense, Dire Lords are also waging war in the imagination of their foe. By infiltrating the essence of a being, the Dire Lord can ravage their enemy with horrifying phantoms, alter the properties of their essence and even steal their essence completely. By mastering Essence-manipulation, the Dire Lord is able to wield their own blood in battle, using it to replenish themselves or to assail their enemies from the inside out.

For in-depth guides to the Dire Lord and beyond, be sure to browse the class guides.

Tank. The role of the tank is to grab and maintain the attention (aggro) of hostile creatures (mobs), directing damage away from their allies. To be able to properly tank, it is important to understand the Hate mechanic. Mobs have a hidden "Hate list" which contains every PC and pet that is in active combat with it ("on aggro"). Whoever is at the top of the list is the target the Mob will attack. Nearly every action a PC takes while on aggro generates hate, though the primary sources are: Dealing Damage, Healing and using specific abilities designed to generate Hate (referred to as Taunts). The tank's job is to use their Taunt abilities to top the Hate List, keeping damage focused on themselves so that healers have as few targets to heal as possible.


While all of the Tank classes are capable of performing their role in all variety of adventuring situations, each has their own specialties that help them excel in specific areas.
The Dire Lord's specialty is against magic-wielding (25px Sanguine Cloak) or magically enhanced foes (25px Edge of Midnight). Unlike the other tanks, Dire Lords cannot equip full platemail (the highest tier of armor). They are far from vulnerable, however, with many of their attacks causing high damage (25px Thresh) and healing the Dire Lord (25px Abyssal Strike).


If a party has more than one tank, it is useful to designate a Main Tank (MT) and an Off Tank (OT).

Utility. Utility is a broad category. It can perhaps best be thought of as a sum of all abilities that do not fall under the other categories (Tanking, Healing, Damage Dealing, Crowd Controlling, Supporting)
For the Dire Lord, their Utility is perhaps best expressed through spells such as 25px Canopy of Blood, which consumes 25% of the Dire Lord's health in order to render all allies nearby immune to magical effects for a time, or 25px Splatter, which is a direct damage ability that can cause debuffs on the initial target to spread to up to 3 nearby enemies.

Essence. In combat, Dire Lords will constantly generate Essence as a percentage of the damage they deal. They will also gain Essence based on the damage they take. As Essence is accumulated, it is represented by an Essence Vial integrated into the character portrait. In addition, certain abilities will increase a Dire Lord’s Essence by a certain amount when used. Other abilities will have an Essence cost in order to be performed.

Dire Lords have a narrow selection when it comes to their weapons: they can wield One-Handed Edged and Two-Handed Edged. Swords and Axes are both edged weapons.