Dark Myr are a Race available to player characters in Pantheon: Rise of the Fallen.

Even in brokenness, the Myr are a proud, masterful race. But while their majesty transcends the waters, they've yet to escape its bitter depths.

On the Dark Myr

Out of their own way, the Dark Myr of Syronai would perhaps become a contemporary of Thronefast -- even its chief rival. But their native beauty, valor and nobility have rusted down to bitter ornaments. A vast disdain for other races lurks beneath their tranquil surface, calling none friend and few honored as foe. Their ferocity in battle is as ancient as their heralded origin, while their tall, slender form and ghostly eyes cast an unmistakable presence. Dark Myr ambitions are a pregnant mystery, their kingdom quietly advancing on land and sea. 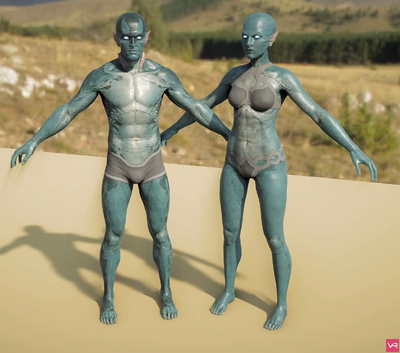 The Myr hail from the planet of Issul, the race born at a time when her oceans were dying. Wars between ancient leviathans had erupted beneath the waves, in battles so fierce even kingdoms on land were destroyed. But the gods of Issul did not stop the calamity, fighting with each other instead of giving aid. At last, one humble goddess named Syronai begged the spirit of Issul for answers. Manifesting herself in the depths, Issul gave Syronai a sacred gift: power to bring forth a single, new creation. With this gift, Syronai fashioned the Myr, a race with kingly hearts and furious might. The Myr struck against the leviathans with abandon, breaking them from war and driving the terrors back into their abysses. With the oceans liberated, the gods came together to bless and rule over the Myr. Songs beneath the sea declared that the Myr carried "the heartbeat of Issul herself" and the race flourished under a unified pantheon. Yet of all the gods, Syronai remained their first love.

In the chaos of their arrival, the Myr were poured into Terminus’ lush seas, but the water worked through their bodies like poison and they could not breathe in it. In an attempt to save the race, Nythir, the God of Battle, sacrificed his body, which was composed of Issul’s native seas, creating a breathable sphere of water within the ocean. Such a mighty gift, yet tragically fleeting as the waters soon mixed again. Even so, Nythir’s closest followers would not move a fin or flinch muscle. Though they drown, their allegiance would not succumb.

“As I lay with my face against the sands, I saw the Nythirian Guard with their twin tridents grasped for battle, hovering below the surface. In my near paralysis, face half under the water and one eye above, I betook the whole of them in perfect battle formation, firm against the death burning up within their bodies. I saw their skin turn red as the breath dried out of them in the acrid underwater breeze, their pose unyielding as statues. I could only lie still, my body just beginning to lose the deep cold of a life beneath the waves. Yet I could not stop from weeping.”

- From the Testimony of Amorthus Osir

With her people still in harm’s keep, Syronai rushed to help the Myr, concentrating her power to transform and adapt the bodies she had created long ago. Yet mysteriously her aid was kept at bay. Sickened with grief as she watched her people perishing, the brave goddess gambled on another, more perilous chance: leveraging the essence of her immortality to recreate the Myr anew, even giving them a lung by which to breath on land and legs with which to walk. In a brilliant moment of sacrifice, the miraculous exchange saved the Myr, transforming them forever. But as the exhausted High Mortal collapsed on the shore of Terminus, the crisis she averted wrought a fate far worse.

"I gasped when I saw the first warrior break the surface, the air silent but for the cry of his assault. Yet soon there were dozens leaping from the surf, all descending upon Syronai, our Lady helpless as her devoted. Helpless as a fish warming on a poacher’s deck before he rips it open. Nythir’s Guard tore into her as if she were a threat, vengeance raw and without gratitude. In their hearts Syronai had participated in her own slaughter by violating their bodies, as Myr and as warriors. She had dishonored them, and far too late we understood just how prepared to die our protector brothers had been.

These we now call the Nythirian Red, though I have heard the name Dread Myr used as well. I can only attest to the sounds of their savagery, for I could not even move my face as the surf rolled with perfect calm over my nose and mouth. Though I dared not drown, for such a twisted fate that would have been. In a few hours the Sun warmed my feet, yet I struggled for months to touch them at all."

- From the Testimony of Lanuis pri Gratta

Many say the cries of anguish loosed that day still linger in the murky waters. The agony of losing Syronai poisoned the Myr hearts as had the deadly oceans, sorrow twisting into bitterness, then hate, until darkness consumed them. The Nythirian Red disappeared into the sea, searching for the means to return to true Myr form. Their brethren were left to pick up the fragments of their past, hoping to fuse them into a future. Yet the fateful day of their arrival is marked by mourning, one week prior and one week after. Among the ceremony is a reading from “The Day of Testimonies” a collection of witness accounts to the lamentable day. Yet there is one “Creature” they blame all things upon, a villain greater than the Nythirian Red, whose vicious actions they rank better than none at all --

"For there he stood far above us, hovering in the sky. A Thing unlike any I had imagined before, a Creature who may have never been made. High in the air he watched us writhe, the strange salvation of 'air' filtering through our quivering bodies, heaving out the poisonous liquid of Terminus’ oceans. That Thing we call Ermos, he and his world Terminus gouged us of all we love, turning even the waters against us. Our own people have slain their Lady, and before our very eyes he watched it unfold. Though her blood ran over the sands and even under our very bodies, we could not lift ourselves up from the crimson pools for many hours.

That is why “Curse Ermos” is our hail, and “Ermos be cursed” our depart. For though he departed with not a word, we speak his name to accuse him and testify of his crimes.

In the present Frail Age, the Dark Myr are seeking to claim the old glories of Issul. They have subdued their realm of the ocean and built a glorious city in honor of Syronai. Yet beneath the surface of splendor, there is an unsettling current that runs through the deep places, where the Dark Myr have descended like the ancient leviathans they were born to destroy.

For an in-depth look at the Dark Myr and the other races, please see the Race Guide.

All Dark Myr gain an innate advantage against the Cunning disposition.