Pantheon: Rise of the Fallen Wiki
Register
Don't have an account?
Sign In
in: Pages with broken file links

Climates are extreme environments found in Pantheon: Rise of the Fallen that can cause detrimental effects to player characters. These effects can be mitigated through the process of acclimation. Each of those extreme climates will have tiers associated with them corresponding to how punishing they will be to players. For example, players may be able to survive in a Tier 1 environment without any acclimation, but would certainly experience some detrimental effects like a weapon or movement speed penalty. The higher the tier, the more detrimental and severe the effects would be. Some climates can be found within other climates.

Acclimation is the process in which a player character mitigates the effects of climates. There are several ways players can mitigate the effects of Extreme Climates. Certain items and buffs will provide a degree of protection, as well as certain racial passives (See above). There will also be an Exposure mechanic allowing players to temporarily build up a further degree of Acclimation by persisting in the same climate for a period of time.

Glyphs will be rare and difficult to attain. They can be found off of powerful enemies in the world or created by max-tier Crafters through recipes requiring rare and valuable components. When acquired, Glyphs will populate a collection list within the Acclimation window of the UI, organized according to climate type, quality, and body location. Once you have found a particular type of Glyph, you will have it to use indefinitely, allowing you to mix and match your Glyphs more freely as your collection grows. 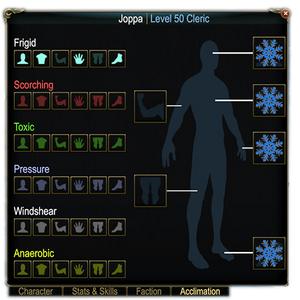 This character has Acclimation Infusions, in this case represented by the Snowflake icons on the right.

Note on the left, the icons that correspond to those with Infusions in them are lit up, providing quick reference