Pantheon: Rise of the Fallen Wiki
Register
Don't have an account?
Sign In
Advertisement
in: Character, Guides

The Character represents the Avatar that you, the player, create in order to enter the world of Terminus in Pantheon: Rise of the Fallen.

Pantheon: Rise of the Fallen takes place on the high-fantasy world of Terminus, a wildly diverse land formed from fragments of many different realms and times, bringing with them their unique civilizations and deities. Explore long lost realms, as their people and cultures vie for power and form alliances, struggling to gain a foothold in an unfamiliar world. Uncover civilizations and awe-inspiring locales that offer incredible adventures for you and your friends to experience. Enter a world where the environment itself tells the story and where content is always king!

Your first step will be to choose a server:

There will be a set of servers from which to choose. These will primarily be 'Player vs the Environment' (known as PvE), but will include at least one 'Player vs Player' (PvP) server at launch.

Your next step will be to choose a race.

The race you choose will provide different racial innate abilities that can and will be handy while adventuring. There will be times when the race you choose is to your, and your party’s, advantage; at other times neutral, and other times to your disadvantage. They will all be useful in any serious dungeon or other adventure area but one may be more advantageous in certain scenarios and situations. Your race may well affect how you deal with the environment, to an extent. Races will also have a specific set of factions at character creation. While there are some nuances to faction and alignment adjustment, evil races such as the Ogre, Skar, and Dark Myr will have a hard time getting close to good race cities. However, you can adjust your faction and alignment through your actions in the game world.

There are restrictions as to which classes can be chosen for any given race, determined by that race's history and Lore.

Your next step will be to choose a class.

A Class is a common method of arbitrating the capabilities of different player characters. A character class aggregates several abilities and aptitudes, and may also detail aspects of background and social standing, or impose behavior restrictions. Classes may be considered to represent archetypes, or specific careers.

With another 2 classes planned to be available around, or after, launch: Bard, Necromancer

Within the game, you will be able to view your Character via the User Interface (UI). 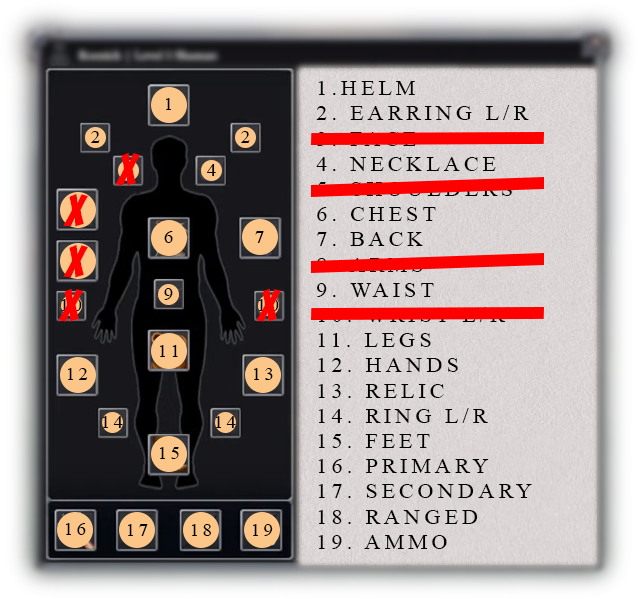 Pictured: The inventory with guides. [Dated 2021]

Stats are the inner workings of Pantheon's combat and world. Each stat can define a value, like how well your character is, what spells you can and can't cast at the moment, how strong are you, or how hardy you are. Attributes also impact spells and skills directly. The amount of influence is determined per ability, and it is currently unknown what aspect of a spell or skill is influenced. (e.g resist chance, damage, duration etc)

Here is a table of the current explained stats in Pantheon.

January, 2021 - Joppa confirmed via a post on the official forums that modifying attributes were still a planned feature: