Archai are a Race available to player characters in Pantheon: Rise of the Fallen. Archai are attuned to one of the elements: Fire, Water, Wind or Earth. Players get to choose which element their Archai is attuned to at Character Creation.

Bred as the ultimate of the slaves, the diverse and vigorous Archai manifest their freedom in celebration and battle.

On the spectrum of uniqueness, the Archai come second only to their neighbor Gnomes. But in a sharp contrast, the culture of Su'Roa is as vibrant and strong as the massive crystals and ores of its geology. Devout and sincere, Archai bodies manifest their environment, their ethereal energy bonding with natural elements at a very young age. This permits the Archai to grow a bit larger than a Human or Elf, but not suffer in agility quite like an Ogre. Loving celebration and battle almost equally, the Archai are positioned well to ascend in the Frail Age, should they choose. 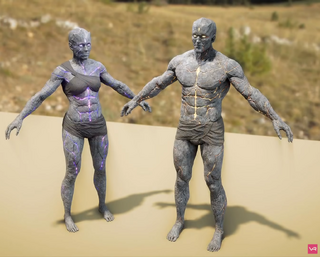 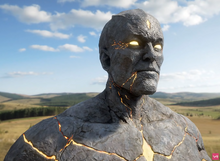 Torn from the ancient crystalline planet of Roa, the Archai were originally created from another race of pure, magical energy called the Aoeyn. These innocent beings were tragically deconstructed and recomposed by the vile followers of Roa’s dark Celestial Lord and bred as a nation of slaves. Thus were born the Archai, a name bestowed by their similarly oppressed alchemic builders to honor the lost lineage of their ancestor Aoeyn.

This desecration wrought the new race with unique abilities, however. Archai were able to graft in the elemental nature from the region of Roa where their life of slavery would begin. When water, fire, wind or any mineral is infused into the young Archai, their weaker arcane core “acclimates” according to those inherent properties. These manifest in magnificent, open striations, markings and textures, whether of flame, liquid, heavy vapors or even precious metals and minerals. This election takes place in the childhood of the Archai, in a devout ceremony called “True Birth”.

Yet the Archai heritage is not one of enslavement, but valor, uprising and celebration. On Roa they waged a clandestine war of liberation, billowing into a nation of indomitable warriors and overthrowing their captors to utter defeat long ago. On Terminus, they are renowned for their culture of endurance, poise and intrepidness, as well as a robust legacy of jubilation, song and display. They are said to entice danger like sport, while their people thrive on the wildly diverse island realm of Su’Roa, which means “little home”.

For an in-depth look at the Archai and the other races, please see the Race Guide.

All Archai gain an innate advantage against the Playful disposition.