Pantheon: Rise of the Fallen Wiki
Register
Don't have an account?
Sign In
Advertisement
in: Stubs, Siganture Character

Edit
This article is a stub. You can help Pantheon: Rise of the Fallen Wiki by expanding it. 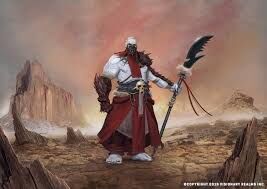 Terminus is a world of countless languages. For every one that finds common use, there are thousands that do not. Yet there are single words which may become universal, stepping beyond their native tongue and into the parlance of peoples living thousands of miles away. Words that find meaning beyond their definition, like a helm meant for battle that finds fashionable use in a noble’s court.

The Clan. The Tome. The Victor.

Amongst the Seven Ogre Clans, this brief recitation is known as “The Three Virtues”, and it is said to hold the three chambers of the Ogre heart. It is a stark but simple trinity, one that has passed the test of any good proverb: being less about words and more about meaning. And though these “virtues” are quite unlike the moral rivets of Elf or Dwarven culture, they are the timber beams that make the large and peculiar tent of Ogrekind possible.

For the tenuously unified clans of Broken Maw, the Three Virtues form a constellation of existence, a map that charts a course through life. Their gods, traditions, and even morality are spun around these three points, with the threads of reality woven carefully in between. As with every constellation, there is one star that shines the brightest, one that captivates the eye and whispers with its flicker. To similar effect, each clan has one virtue that sits higher than the rest. The devout Way of Asturr prize their Tome of War above all else, while the irreverent Fangoon celebrate familial bonding more than relics or battle. Yet in all cases the clan is the anchor for each of the virtues, where an immortal tether connects with the all too mortal world.

Since each of the Seven Tomes of War were taken and presumed lost by the Black Moon King over 700 years ago, it may seem that the clans who prize those artifacts are at a disadvantage. Yet before he disappeared from Broken Maw, the king had much of the runic sephers copied by scribes, and these copies he left behind. Even without translation, the indecipherable runes hold considerable power, as even transcribing them is a task deadly enough to separate imposter from master. With such a delicate task necessary to produce so little reward, few clans see their tome as a north star. Yet the Black Moon and Way of Asturr are patient—or perhaps fanatical—enough to glean from these divine inscriptions, no matter the cost.

Among the Dark Sun, victory has forever been paramount. On the Ogre’s former planet of Ghorrok, this bloodthirsty clan was only as strong as its ability to conquer and subdue. The victor was the Dark Sun lodestar, and a blade thrust into the neck of a foe was as much an expression of purpose as of power. Even their patron deity, Rathamel, tailored his followers to see themselves as instruments in his hands rather than independent beings of flesh and blood. Thus, when on Terminus, the Black Moon King buried their greatest warriors into the clay cliffs at the edge of the Whispering Lands, he crushed more than bones and bodies. If there were no Dark Sun warriors, what means of victory remained? If there was no means of victory, what was left of the clan? When the air settled and Rothuk easily claimed their Tome of War, he shook the dust of their identity from his feet. And though that moment occurred well over half a millennium ago, observers of the Ogre clans remark that the Dark Sun has never fully recovered.

Yet if the Three Virtues are the very heart of every Ogre, what becomes of those who’ve had them ripped from their chest? What is virtuous for one who has no clan, no tome, and therefore no means of victory? If all that is real is removed, are they even Ogre anymore? From the perspective of Broken Maw, these outcasts are not.

Outcasts, known as “the dhaun.”

Historians often define the Ogre word “dhaun” to mean “homeless”, or a similar variant. This is an error, as the true meaning lies beyond that category. The oversight may be due to unfamiliarity with the Ogre root word for “home”, which is something of a hybrid that means “tome-land”. On their native planet, the Tomes of War were the basis for each clan’s existence, their claim to territory and legitimacy. Therefore whatever land the home was in, the tome was in, without exception.

Throughout the Seven Clans there are many wretched souls, murderers, slavers, and the like. Yet these individuals are afforded refuge or even honor within their own clan, despite what the larger population may think of them. To be dhaun, however, is to have no place among any of these groups. There is no larger body to bleed on your behalf or dare another clan to exact justice for your crimes. Dhaun exist without heritage and are severed from their lineage.

No clan, no tome, no victor.

Indeed, they are even marked for death by other Ogres, who are permitted to kill their excommunicated brethren without cause or fear of retribution. This anchors the reality that dhaun possess none of the Three Virtues, and therefore will not be defended as those who do. In a very Ogre sense, Dhaun live outside existence, without a past, present, or future.

Atop a hill known simply as “the mouth”, a young Arak’amel watched as his father was led in pitch-soaked cords to the edge of a large crater. Located on the outskirts of Broken Maw, the mouth was so named after the gaping pit that sat at its summit, a vast fissure that made the hill look as if it were screaming at the sky. From this height, the bodies of countless enemies had been tossed, fed to the unknown beast that roamed in the cavernous depths below.

Arak’amel trudged beneath torchlight, his two older brothers alongside, to the very edge of the yawning pit. In the daylight the mouth was a strange monolith, but in the night it somehow seemed... alive, as if it could swallow them all if it so desired. Arak’amel stood wide-eyed as his father was commanded to kneel before the great pit, then closed those eyes when the sentence was read aloud. Into the mouth, a tall Ogre declared, for the killing of two members of the Black Moon clan.

Arak’amel had been home that morning when the two Ogres who served Oru’kov, the lord of their clan, arrived on his family’s land. He was there when his father spoke a single word to warn them from stepping further, and read the hesitation on their faces even as their feet continued to move. Now, as he stood atop the mouth, his face still bore specks of dried blood from the moment his father drove a stone tool into their skulls. Seeing this mighty Ogre kneeling at the edge of death, the same dread that rippled through Arak’amel that morning returned with compelling terror.

Steadily, his father rose to his feet, whether planned or in response none could say. The six or seven guards scattered about the summit gripped their weapons till the wood groaned before taking a step toward him. Yet before any could strike, his father spoke with a voice as calm as the rain, “Honor does not die, my sons.” Without another word, he stepped back off the pit’s edge, entering the belly of the mouth without a single sound. Arak’amel’s eyes followed after his father’s body, his hands reaching in the air, falling helpless at his side. Now the ready guards turned for his oldest brother, but they did not make it far enough to touch him.

It was Arak’amel’s eyes that changed first. Something clouded over them, a red that swirled for a moment before settling to a black as deep as the pit that consumed his father. With those eyes he saw a familiar hesitation in the guards, and like his father he took advantage of it. Though Arak’amel was not yet fully grown, his ability to kill matured in an instant. In this moment he was overwhelmed by the Dire, his body unable to yield until it was satisfied with vengeance. His movements were swift and vicious as a wild beast, and in dying none of the guards would imitate his father’s gracious silence.

When the slaughter was complete, the only Ogres left standing were Arak’amel and his brothers. They dared not approach him, even as the black in his eyes began to recede. With few words they implored him to flee Broken Maw and never return. As fear washed over him once more, Arak’amel ran down the mouth, kicking dust in the dark and leaving his brothers to throw his victims into the pit.

In the months that followed, the Dire came to Arak’amel with increasing power, though most often as he slept. It would seem to warn him of threats even before his ears could detect them. The Black Moon sent dozens of warriors after him, assassins, and even groups of shaman, yet the Dire revealed them all.

In time, Arak’amel became less of an Ogre and more of what is known as a “Dire Lord”. Yet unlike most in that unsettling fraternity, Arak’amel did not seem to trust the dark mystery that dwells within. Much of his effort was spent keeping the powerful force in check, careful to wield and not be wielded by. As months became years, he spent much of his time as a soldier for hire, or occasionally leading small bands of dhaun or Dire devotees. Yet knowledge more than war was Arak’amel’s focus, and no matter his battlefield success, the Dire would push him further into isolation. He did not revel or boast, he spoke no reply to challengers or fools. In fact he rarely used words at all, even going so far as to place a slate mask over his mouth to speak for his silence. In contrast, the Dire whitened his skin, removing him further from the appearance of an Ogre and toward that of an apparition. His eyes stayed forever black, with smoke-like stains fanning out around the rim, as if they’d been on fire for years.

For several years Arak’amel continued to be hunted, but the body count of these assailants only grew in kind. In the early months, most were killed with his bare hands until he fashioned the black-bladed weapon known as Moonfell. While he is no longer actively sought, there is a rumor that a bounty remains on his head, and even that his name is carved into the very throne of the Black Moon clan. This is so every successor king who sits upon it will be taunted until the dhaun is dead. Arak’amel has carvings of his own, but the cuts are into his skin rather than wood. These are the red runes that adorn his body, and their meaning is a riddle without an answer, perhaps even to Arak’amel himself. Some have taken to calling these inscriptions the “Tome of the Dhaun”, completing a rather peculiar circle. One that suggests the Three Virtues may have power even greater than those in Broken Maw could have ever imagined.

The Dhaun. The Tome. The Dire.